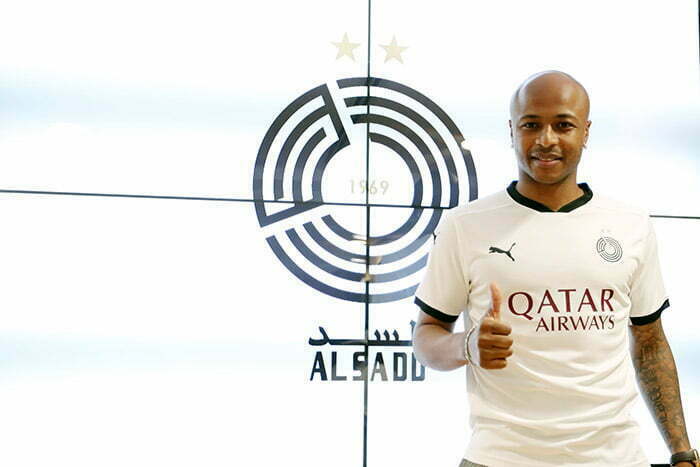 Ghanaian international Andre Ayew, Al-Sadd’s new signing, expressed his happiness and pride in joining the Qatari club, describing it as a new challenge in his career.

In an exclusive statement to the club’s website after signing the contract with the Wolves, Ayew said: “I am very happy and proud to play at Al-Sadd. It’s an important moment for me and my family, because of what Al-Sadd provided to my family in the past, and therefore when the club offered me a contract, I agreed immediately and I am sure that we will win more championships together.”

On the role of his father, Abedi Pele, in him joining Al-Sadd, Ayew said: “Certainly, I heard from my father of the wonderful memories he had from his time with Al-Sadd in the past. He told me a lot about the club and Qatar, and he helped me make the right decision to play for Al-Sadd.”

Asked about his knowledge of Al-Sadd’s players, the Ghanaian star said that he had played against many of the team’s players and knows them well. “I know Baghdad Bounedjah, who I played against in Africa, as well as Akram Afif, Hassan Al Haydos and Saad Al Dosari, who I know from the Qatar national team. I knew Santi Cazorla too during his time in the Premier League. I hope to be of great support for them in the upcoming challenges.”

He added: “Xavi, the coach of the team, was a great player and played for a long time with the biggest and best club in the world – Barcelona, ​​and he is now a coach for the best club in the Gulf after playing with the team for five years. I follow the Al Sadd team and watched the development that took place in the team’s performance in terms of entertaining football, the positioning of the players and the great tactics with which the team plays. I expect to learn a lot from him during my time with him.”

Ayew concluded by saying: “My goal is to win titles, to make the fans happy, and to strive hard to win the AFC Champions League.”