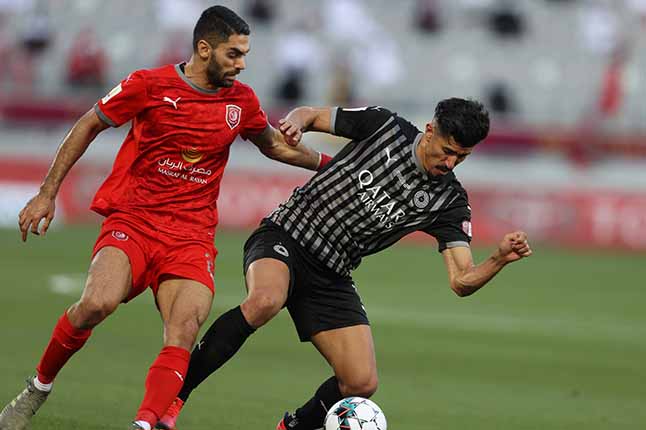 Al-Sadd were crowned as champions of the 2021 edition of the Qatar Cup, after a 2-0 victory over Al-Duhail in the final which was played at Abdullah bin Khalifa Stadium on Friday.

Baghdad Bounedjah scored both goals of the game (9′, 77′) to give Al-Sadd their 8th title in the competition. Al-Duhail ended the game with ten men after Sultan Al-Braik was sent off in stoppage time.

The Wolves began the game on the front foot and were rewarded with a goal early on, when Bounedjah stuck with an acrobatic finish after Nam Tae-hee’s initial shot was deflected onto his path.

Thereafter, Al-Sadd went on to dominate the game with the front four of Bounedjah, Nam, Al-Haydos and Cazorla combining to great effect. In the 21st minute, Mohammed Waad was presented with an opportunity to shoot from the edge of the box but his powerful attempt was deflected away for a corner.

Al-Sadd were then awarded a penalty by the referee in the 38th minute, after a foul on Bounedjah in the box, but the decision was reversed after a VAR review. There were three minutes of additional time, but no goals arrived, and Al-Sadd went into the break with a slim advantage.

The second half began with intense action as both sides fought it out. Al-Sadd almost scored their second in the 54th minute, but Khoukhi’s header came back off the post. After the hour mark, Xavi made his first change, bringing on Rodrigo Tabata in place of Mohammed Waad.

In the 66th minute, Edmilson sent a powerful shot at goal from the right but Meshaal Barsham managed to keep the ball out with a great save. Al-Duhail then thought they had scored moments later, when Michael Olunga headed in past Meshaal, but the referee ruled the effort out for a push on Abdelkarim just prior to it.

Bounedjah then settled things in favour of Al-Sadd with his second of the game in the 77th minute, latching on to a through ball from Cazorla before scoring with a dinked finish over Al-Duhail keeper Salah Zakaria.

Al-Sadd maintained their advantage for the remainder of the game, to retain the title they won last year with a 2-0 victory.